So, inspired by his time in Colorado, and knowing that his commitment to skateboarding would be a life long ambition, Rob decided to build a small skate spot in Ft Lauderdale. He planted this "seed" and from their a community began to grow. That community produced a team of riders who eventually needed the support of a reall shop to help them progress in the industry and so Mad Skate Shop was born. Rob and his wife Yaz continue to support the skate community through events and charitable work through the Strive Network, where they raise funds for skaters to receive assistance in both programing and connecting kids with boards and helmets and whatever else they may need. They also remain committed to developing new venues for skateboarding.

Mad Skate Shop - A core skate shop that preserves the tradition of skate boarding and supports the South Florida skate community with the ultimate goal of creating new parks.

Mad About Skateboarding - An educational programm connecting a new generation of skaters to the art of skating in a safe environment while teaching them life skills through the discipline of skateboarding - hard work, commitment, sportsmanship, community.

Founder Robert Holbrook was born and raised in South Florida. He began skating at age 10 and by 14 he was on the first Island Water Sports skate team. From that age on his love and commitment to skateboarding - the sport, the culture and the community, has never faltered.

In 1996 he moved to Colorado where he witnessed the incredible growth of the skateboarding scene. In 2000 he become a part of the 303 Boards team as their team manager. During his time with 303 they grew to become a house hold name in skateboarding, winning Thrasher Magazine's best shop video award numerous times and touting a team with unparalled talent and several pros like Ernie Torres, Angel Ramirez and David Reyes. After 13 years with 303, Rob returned to South Florida in 2012 expecting to find the same kind of growth in the skateboarding industry that Colorado had experienced. To his surprise he found that his home town of Ft Lauderdale had not built a single park and that there were only a few core skate shops spread across Broward, Dade & Palm Beach Counties, but again none in Ft Lauderdale. What he quickly found out was that, the lack of parks and shops was not due to lack of demand. In fact everyone wanted to skate! 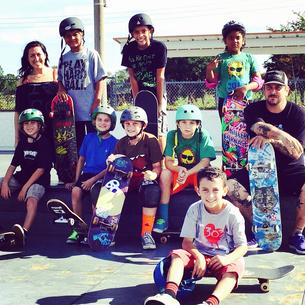